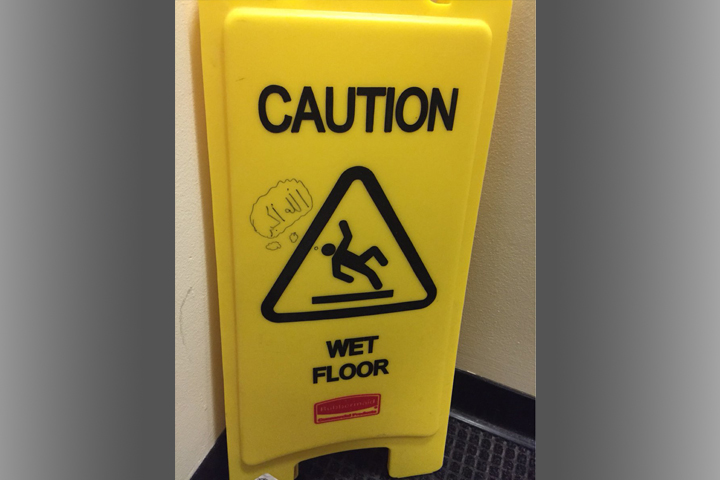 After an Arabic phrase was written on a caution sign in a University of Maryland dorm, police are saying the incident is not one of hate bias.

A drawing on a “caution wet floor” sign in St. Mary’s Hall on Wednesday night showed a speech bubble coming from the figure in the sign, saying “Allahu Akbar” — a phrase commonly used in the Muslim community meaning “Allah,” or God, “is great” — in Arabic. The sign was in the Arabic Language House program cluster stack.

Sarah Eshera, Muslim Alliance for Social Change president and a senior mathematics and philosophy major, took to Twitter to share her thoughts on the incident.

“Someone wrote “Allahu Akbar” (God is the greatest) on a caution sign implying to be cautious of people who say that (Muslims),” she wrote in a series of tweets. “Or implying that the person looks like they’re blowing something up. … Angry, but not surprised.”

“Obviously there’s no way to be sure what the person’s intentions were,” Eshera said. “[But] any way it’s interpreted, I feel like it’s negative and it’s offensive.”

Resident Life immediately sent a letter to residents in the stack that same night calling the act a hate bias incident, Kiras said. The letter also said the incident was “unacceptable,” “deplorable” and “extremely concerning.”

“Hateful incidents such as this are appalling and hurt all of us in the community,” the letter read. “As students living in the residence halls, you deserve to be respected and we will continue to work collaboratively with you and with University Police to foster a safe and respectful community.”

Kiras said the writing on the sign was “impactful for some, and may be interpreted as insensitive, but not necessarily a bias incident.” Resident Life took down its letter to students in the stack once it was determined not to be a hate bias incident, Kiras said.

On Oct. 2, “REEEEE” — a derogatory slur used to either express outrage or represent so-called autistic screeching, according to the Southern Poverty Law Center — was written on a student’s whiteboard in Anne Arundel Hall. Police did not classify this as a hate bias incident, as Hoaas said the person who wrote the phrase meant it as a joke.

Following the incident in St. Mary’s Hall, Resident Life staff has had “ongoing discussions” with residents within the community, who later agreed it wasn’t a hate bias incident, Kiras said.

“Initially, I think students were feeling one way, and then after really having a chance to talk with other members within the community, and hearing different perspectives about it, that I think pretty much everyone landed on the same page that this wasn’t a bias incident,” she said.

“We quickly discovered that there were factual errors in the letter, and so we removed it,” she said. The letter had called the writing a racial slur as well as deeming the act a hate bias incident.

The department has not identified who wrote on the sign and is not conducting any further investigation, Kiras said.